Villa d’Este Italy–When Rolls-Royce presented the 103EX Vision Vehicle to the world, it invoked its coachbuilding heritage to inspire its future clientele. This Vision Vehicle envisaged a world of completely personal luxury mobility where new technologies would allow every Rolls-Royce to be designed in their owners’ image, should they wish. Such a Rolls-Royce would represent the truest meaning of luxury – a personal, Bespoke motor car like no other for each individual commissioning patron. 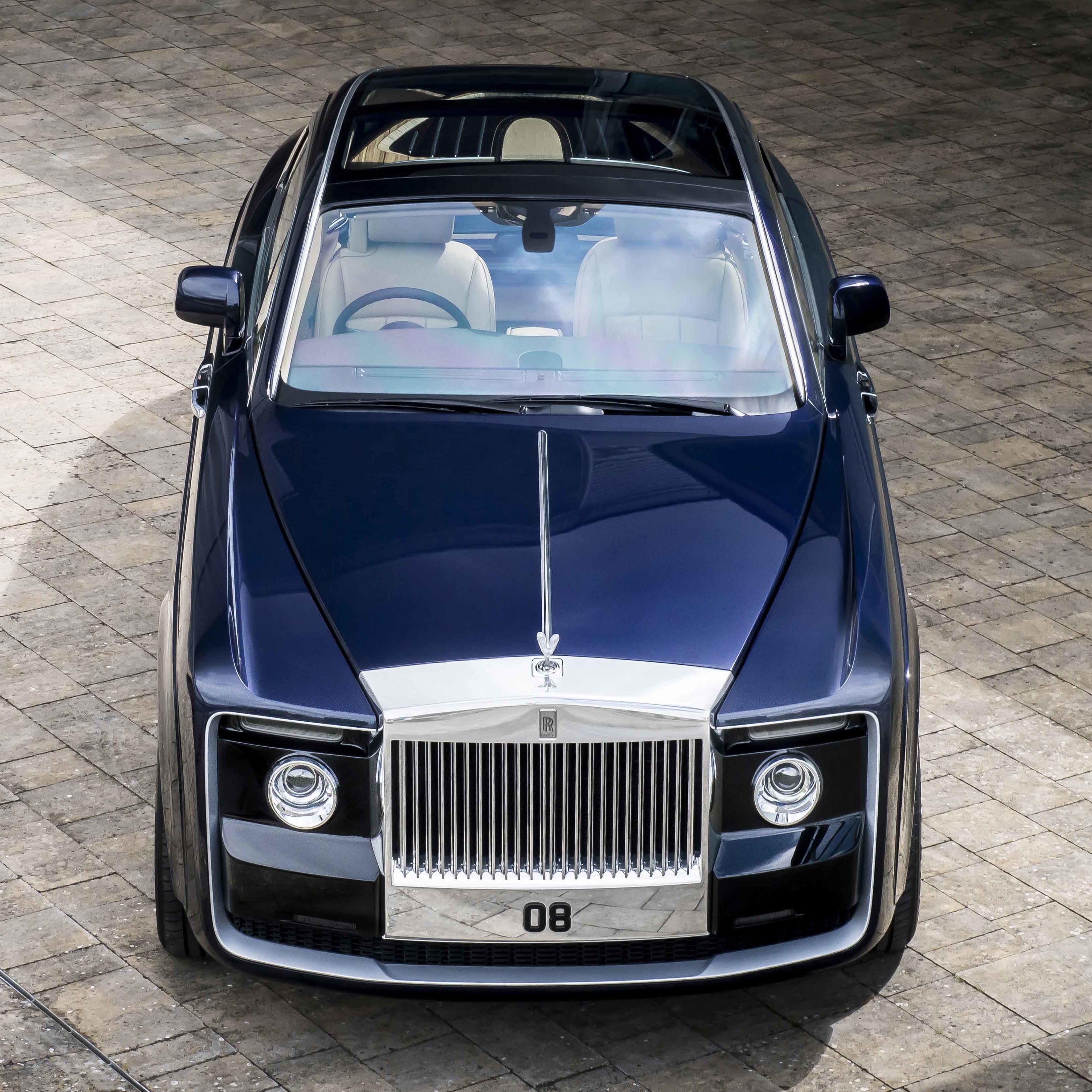 The idea of a future coachbuilt Rolls-Royce was not enough for one Rolls-Royce connoisseur however. This individual approached the marque with his own idea of a two-seat Rolls-Royce that he wanted to be created in the here and now. That motor car is here, now, and is christened ‘ Sweptail’. In a nod to the swept-tail of certain Rolls-Royces from the 1920s, admired by the client so much, he asked Rolls-Royce to reimagine this feature on his one-off motor car.

Presenting the car to the media at the Concorso d’ Eleganza at Villa d’ Este on Saturday 27th May 2017, Torsten Müller-Ötvös, Chief Executive Officer, Rolls-Royce Motor Cars said, “Sweptail is a truly magnificent car. It exudes the romance of travel for its own sake, and immediately places ‘Sweptail’ in the pantheon of the world’s great intercontinental tourers. Rolls-Royce’s history as the world’s leading coachbuilder is at the very core of its identity as the world’ s leading luxury brand. The arrival of 103EX shone a light on the future of Rolls-Royce in this field, and ‘Sweptail’ is proof, today, that Rolls-Royce is at the pinnacle of coachbuilding. We are listening carefully to our most special customers and assessing their interest in investing in similar, completely exclusive coachbuilt masterpieces.At the same time we are looking into the resources which will allow us to offer this unique service to these discerning patrons of luxury.”

‘Sweptail’–how the vision became the reality

“Sweptail is the automotive equivalent of Haute Couture,” comments Giles Taylor, Director of Design at Rolls-Royce Motor Cars. “It is a Rolls-Royce designed and hand-tailored to fit a specific customer. This customer came to the House of Rolls-Royce with an idea, shared in the creative process where we advised him on his cloth, and then we tailored that cloth to him. You might say we cut the cloth for the suit of clothes that he will be judged by.

”Inspired by the beautiful coachbuilt Rolls-Royces of the 1920s and 1930s, the customer’s desire was for a coachbuilt two seater coupé featuring a large panoramic glass roof. As a connoisseur of Rolls-Royces, he was inspired by many of his favourite cars from the early 20th Century, as well as many classic and modern yachts.

Over the course of a number of years, Taylor and his team of designers engaged with the client in a wonderfully intellectual journey as they worked together to realise the customer’s distinct vision and bring it to life. The result of this one-off coachbuild project is the completely unique Rolls-Royce ‘Sweptail’.

The ‘Sweptail’ is without question a Rolls-Royce that fits to the marque’s DNA. One’ s attention is first attracted by the confident and solid character of the front profile, centred on a new treatment of the iconic Rolls-Royce Pantheon grille. The largest of any modern era Rolls-Royce, the grille is milled from solid aluminium before being painstakingly polished by hand to a mirror finish. The periphery of the front face of ‘ Sweptail’ is framed in brushed aluminium.

As one moves around to the side of ‘Sweptail’ one finds that it is the striking silhouette that defines its unique character. Flowing as they do from upright and formal frontal aspect, the lines of ‘Sweptail’ resolve into a sveltely elegant form. The scale and grandeur of this regal looking coupé is evident. From the leading edge of the windscreen, the roofline accelerates as it fires backwards towards the rear of the motor car, overshooting the boot lid edge to emphasise its length.

The coup de gras of the rear is the ultimate homage to the world of racing yachts that inspired the client, with its raked stern. Seen directly from behind, the rear taper contrasts strongly with the front of the motor car, shaping a completely new perception of a dramatic Rolls-Royce Coupé.

Finishing off the uncluttered rear of this one-off motor car, is its identifier and registration number, 08, the two numbers milled from ingots of aluminium and hand-polished.

The cleanliness and grandeur of the bodywork from the side view, the lengthened side windows and the panoramic glass roof combine to illuminate the two singular occupants of this most singular Rolls-Royce and its modern, minimalistic handcrafted interior.

And what a place to be as one watches the world slip by through the vast windows and roof. The interior is ruled by a philosophy of simplicity and minimalism leading to a distillation of componentry and a purification of clutter.

Generous quantities of polished Macassar Ebony and open-pore Paldao adorn the interior, creating visual and tactilecontrasts for the owner, both classical and contemporary. It is set off by contrasting light Moccasin and Dark Spice leathers that adorn the seats, armrests and dashboard top.

True to the spirit of a transcontinental GT that Rolls-Royce established in the 20s and 30s, in place of the rear seats is a vast expanse of wood creating a mid-shelf with an illuminated glass lip. Sitting under the rear opening backlight through which it can be accessed, the hat shelf is in itself a thing of beauty, highly polished and inset with luggage rails.

Behind the occupants, a feature named the Passarelle flows from the rear edge of the windscreen to resolve in a teardrop as it connects to the hat shelf to join all interior volumes.

The cleanest Rolls-Royce dashboard to date, the minimalist ethic not only dictates that only one control now appears on it whilst all other switchgear is discreetly relocated, but that the clock blends seamlessly too. In a world first, the face of this singular Rolls-Royce clock is also handmade of the thinnest Macassar veneer, visually embedding the clock into the fascia, highlighted by precision machined titanium hands. This use of titanium then extends to all three hand-assembled instrument dials.

Two final surprise and delight features have been secreted inside ‘Sweptail’.

Concealed in the outboard walls on either side of the motor car, behind the opening of the coach doors, are two identical panniers which contain two handmade attaché cases deployed at the touch of a button.

These attaché cases are twinned with the full set of luggage also developed by Rolls-Royce Bespoke for ‘Sweptail’.

The coup de gras of this one-off masterpiece is as personal to the owner as every other feature of ‘Sweptail’. The entire centre console now houses a one-off hand-built mechanism that deploys a bottle of the client’s favourite vintage champagne and two crystal champagne flutes.

A most personal, coachbuilt Rolls-Royce for a specific customer, every aspect of the material treatment of ‘Sweptail’ exudes handcrafted quality and exacting attention to detail. In short, it is a Rolls-Royce but like no other before.